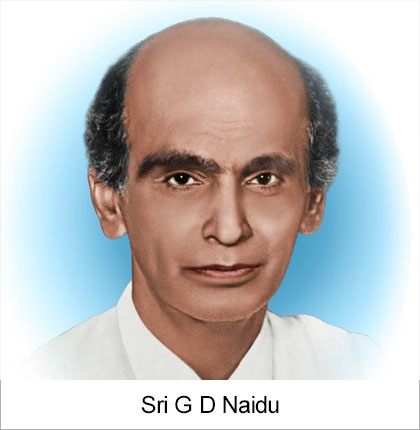 Sri G D Naidu, an eminent industrialist and philanthropist of Coimbatore, South India, had a great passion for the automobile. He visited several countries during his life time and was fascinated by the workmanship and engineering capabilities of Germany. He was specifically in admiration of the workmanship in Rolls Royce 20 car, after visiting the factory in United Kingdom. He felt that the students in his automobile institute must look at the engine, the differential gear box etc, where they did not use gaskets as in other cars, but blue matched them by hand scrapping. This at that time led to the achievement of heights precision and workmanship. He took classes and often had to bend down under the chassis to show the students about how many bolts were used with a specific torque to eliminate gasket.

In late 1960, he stripped the original body of the beautiful Rolls Royce and his explanation was that due to old age he found it difficult to bend down each time to explain to the students. Now the whole mechanism can be clearly seen from the top. His passion didn’t end with this. He started collecting unique cars which had a history of its own and was in some way an engineering marvel, Sri Naidu’s son GD Gopal continued his father’s hobby by not just adding to the collection, but maintaining most of the cars in motorable condition and initiated the setup of Car Museum and put it all together as a museum for the general public on 27thApril 2015.

The main objective of the museum is that the students and general public, who see these cars, should also learn about technology behind it and the person responsible for such innovations, either in design or engineering or in workmanship etc. and this museum tries to give as much information as in necessary, to highlight the men behind the marvels. It is the desire of Sri G D Naidu that students should get inspired by these examples and he started thinking that if in the late 18th century people could create such wonders even without much facility and technology advancement why can’t they think of such revolutionary ideas?

GD Naidu Museum is dedicated to these innovative personalities who besides their lack of education or wealth were able to contribute to the growth of the automobile industry.